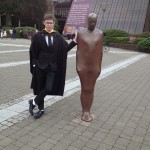 Cormac will be representing the Napoleon Society of Ireland in Grenoble this coming July.

On behalf of our Patron and all our members, I would like to thank Cormac for taking on the role of Vice-President of the Napoleon Society of Ireland and helping us to secure the future of the organisation for some time to come.

Details of our plans to celebrate the 250th anniversary of the birth of Napoleon in August will be announced soon.

This entry was posted in News. Bookmark the permalink.