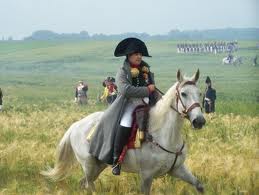 Marengo, the famous war mount of Napoleon was named after the battle of Marengo through which he carried his rider safely and without harm.

Said to have been imported from Egypt to France as a six year old in 1799, he was a small (14.1 hands) but reliable, steady and courageous mount.

Merango died in 1831 in England at the age of 38 and his skeliton is now on display at the Chelsea War Museum in London.

There are rumours, however, that Marengo was infact Irish bred, a fact shared with us by renowned Irish Napoleonic collector and enthusiast, Dr. Noelle Campbell-Sharp.