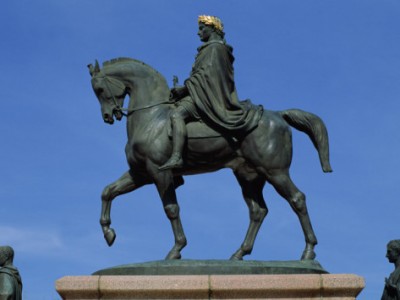 Napoleon Bonaparte was born on the 15th of August 1769 in Ajaccio on the Island of Corsica. He died on the 5th of May 1821 on St. Helena.

One of the greatest military commnaders of all time, it is said that Napoleon’s military endeavors and sheer personality dominated Europe in person for a decade and in thought for a century.

Born in 1769 to a wealthy Corsican family, his father Carlo Bonaparte was a lawyer and political opportunist. His mother, Maria-Letizia a formidable matriarch, was the driving force behind Napoleon’s ambition which enabled him to enter the military academy at Brienne in 1779. He moved to the Parisian Ecole Royale Militarie in 1784 and graduated a year later as a second lietuenant in the artillery. Spurred on by his father’s death in February 1785, the future emperor had completed in one year a course that often took three.

Known mainly for his military campaigns across Europe in the early 18th century, it is often forgotten that Napoleon was an ardent humanitarian reforming the French economy, legal system, Church, military, educational system and government.

By the time of his death in 1821, he had secured a place for himself in history which has captured the imagination of millions with over 2,000 biographies of his life published to date. “The Emperor Napoleon in His Study at the Tuileries” 1812 (Courtesy of Wikimedia Commons).