Surgeon to the Great Army

FINS, Medal of honour of the INS, Member of the Legion of Merit of the INS 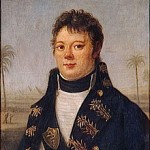 Born in Alençon on May 23, 1762, he was the son of a lawyer at the Parliament of Rouen and grew up in the family estate called « Les Genettes ».  He studied at the Jesuit college at Alençon, and in 1776 he arrived in Paris and began studying at Sainte-Barbe and the Collège du Plessis. He had a passion for natural science. Once he passed his master’s degree in Art, he started studying medicine. He started training in the hospital services of Pelletan and under the anatomist Vicq d’Azyr, who was secretary of the Royal Society of Medicine and Marie-Antoinette’s first doctor. In 1784, René-Nicolas was able to travel thanks to the inheritance that his mother bequeathed him. While in London, he studied under John Hunter and Moore. Once back in France, he met Desbois de Rochefort and Boyer at the Saint-Louis Hospital. Then, he left for Italy where he lived for 4 years. He discovered Florence, Siena, where he studied anatomy with the Great Mascagni, before moving to Rome and Naples. In 1789, he defended his Phd on July 6. His thesis was entitled “Essai physiologique sur les vaisseaux lymphatiques” (Physiological essay on the lymphatic vessels). He naturally joined Chaptal’s laboratory (http://www.medarus.org, 2010).

In 1791, he decided to go to Paris. After Varennes fled and Louis XVI was arrested, Desgenettes joined the Girondins and adopted their political views. The Girondins were subsequently decapitated by the Montagnards during the Reign of Terror. The young doctor took refuge in Rouen where his former master, Vicq d’Azyr, advised him to enlist in the army. Speaking Italian fluently, Desgenette was sent to Italy where, in March 1793, he was attached to the field hospital of the Armée de la Méditerranée (http://fr.wikipedia.org, 2010).

After serving in the field hospital, he went to Frejus, Grasse, Antibes, Sospel, Orneilles and Nice. It was during this campaign that he got to know Napoleon Bonaparte. The emperor was dazzled by Desgenettes’s intelligence and knowledge, and would never forget him. A few years later, Bonaparte made him chief doctor to the Egyptian expedition. Attached to the division commanded by general Masséna, Desgenettes successfully contained a typhus epidemic. Despite suffering from the illness himself, he survived. On January 13, 1794, he cured the patients of the hospital at Antibes. On September 16, he was made head of the hospital service of the right division in Loano. Then, he was to organise the medical service for the maritime expedition tasked with re-taking Corsica which had been conquered by the English (http://www.medarus.org, 2010). Back in France, with Bonaparte’s recommendation and Barras’s support, he had been made “médecin ordinaire” of the Val-de-Grâce hospital and of the 17th military division in Paris on October 29, 1795. In 1796, Desgenettes became a professor of physiology and medical physics. There he met Dominique Larrey. However all those nominations kept him away from the army of Italy and he did not contribute to its success. On January 11, 1798, he married the daughter of the former General Inspector of the hospitals under Louis XVI (http://www.medarus.org, 2010).

On returning to Paris, after the Treaty of Campo Formio (October 17, 1797), Bonaparte secured for Desgenettes an attachment to the English army. On March 22, 1798, Desgenettes was sent to Toulon to be attached to Bonaparte’s army as doctor in chief. That same year, he was put in charge of the medical service of the Oriental Army. His involvement was so exemplary that Bonaparte invited him on board the admiral’s flagship Orient (Ganière, 1988).

In Egypt, the doctors were assailed by several diseases afflicting the army that were brought on by the burning heat, continual bivouacking, and lack of drinkable water. Desgenettes implemented hygiene and rigorous preventative measures, including washing of both bodies and clothes, disinfection of areas and supervision of nutrition. He met all cases of tropical disease. During the march across the Syrian desert, René-Nicolas had to face an epidemic of the plague. To sustain the troops’ morale, he forbade any mention of its name and coined other names such as “bubonic fever” or even “gland disease” to be used. In order to prove that the plague was not contagious, Desgenettes inoculated a drop of pus thanks to a lancet that he used to take a sample under his skin (Ganière, 1988). It is thanks to his bravery that he succeeded in raising his disillusioned and decimated soldiers’ spirits

On April 28, 1799, Desgenettes carved his name into history. While Bonaparte found himself forced to defend a siege against the fortress at Saint-Jean-d’Acre, he demanded that the medical staff evacuate the wounded. Fearing that the wounded would be killed by the Turks if he gave up on them, and that the rest of his army would be contaminated if he brought them, the General was said to have asked Desgenettes to kill the plague cases with lethal doses of opium (Ganière, 1988). Desgenettes determinedly refused to do so and stood against the French commander-in-chief with all his will. Bonaparte accepted and instead transported them as far as Jaffa. Once there, he made sure that a detachment would guard them. However, forced to surrender the city under the enemy’s pressure, he was reported to have approached the chief pharmacist of the expedition, Claude Royer, to kill the dying soldiers with laudanum in order to shorten their pain. Desgenettes did not speak to him until his departure from Egypt on August 22, 1799. The dentist practiced among Kleber’s army, and that of Menou after Kleber’s assassination in 1801 (Ganière, 1988).

While he was First Consul, Bonaparte designated Desgenettes as head doctor of the military training hospital of Strasbourg. However, due to his need for stability after a punishing campaign, Desgenettes refused this new position and begged instead to continue as doctor to the hospital at Val-de-Grâce. On December 29, 1801, Napoleon approved this request. The same year, he was made a member of the Institute and an associate member of the Medical Societies of Marseille and of Montpellier. The following year, he published his Histoire médicale de l’armée d’Orient, creating a great sensation among scholars, which he dedicated to General Kleber (http://www.medarus.org, 2010).

On May 18, 1804, the First French Empire was proclaimed. The very next day Desgenettes was made a member of the Legion of Honour and on June 14 he was made Inspector-General of the Army Health Service at Larrey, Percy and Heurteloup (http://fr.wikipedia.org, 2010).

He then became a member of the commission sent to Spain by the Emperor to carry out research on the yellow-fever that was raging there. In 1806, René-Nicolas re-assumed his duties at Val-de-Grâce. On April 6, 1807, Napoleon made Desgenettes Chief Doctor of the Grande Armée. Therefore, he attended the battles of Eylau (1807), Friedland (1807) and Wagram (1809). In 1808, he went to Spain with the Emperor where the situation was more than worrying. In 1809, he was made a Knight of the Empire, then a baron in 1810 (http://www.medarus.org, 2010).

During the Russian campaign, he was on every front. His sense of self-sacrifice and his devotion to his patients became legendary. On December 10, 1812, he was captured at Vilna during the French retreat from Russia. Tsar Alexander III of Russia freed him when hearing his name. As a token of gratefulness for the care he had taken of Russian soldiers, the Tsar had him escorted by his Cossack guard to the French forward-lines on March 20, 1813.

Made Chief-Doctor of the Imperial Guard during the campaign in Germany, he only learnt about his nomination when he returned to France in 1814. In 1813, the French soldiers were defeated at Leipzig. As for Desgenettes, he was imprisoned in the citadel of Torgau where a typhus epidemic was raging at the time, killing 13,448 men out of the 25,000 men of the garrison (Meylemans, 2010).

After Napoleon’s abdication, Louis XVIII  – who was back at the head of the country – withdrew Desgenettes from all of his military duties. However, he kept his prerogatives in Val- de-Grâce and at the Faculty.

During the Hundred Days (War?), Desgenettes naturally joined the Emperor on Elba and re-assumed his role as Chief-Doctor of the Imperial Guard. He followed Napoleon at the Battle of Waterloo on June 18, 1815 (Ganière, 1988).

When Napoleon capitulated, Louis XVIII came back to power but Desgenettes’s name became legendary. The new King of France confirmed him in his roles under the First Restauration and readmitted him into the Conseil Général de Santé des Armées in 1819. Commander of the Legion of Honour, he was involved in the creation of the Académie Royale de Médecine, of which he became a member in 1820. In 1822, he was expelled following student demonstrations and his call for tolerance. He had just been given the duty of choosing the doctors who were supposed to join the Emperor in Saint Helena. Unfortunately, the (Emperor?) had just died at that point (http://www.medarus.org, 2010).

After Charles X’s abdication (1830), he was re-admitted. In 1832, he was elected member of the Académie des Sciences. In the same year, on March 2, he was made Chief Doctor of Les Invalides, where he died in 1837, on February 3, following a stroke. A first stoke had made him disabled in 1834.

Elected Mayor of the Xth arrondissement (which is the VIIth today) in Paris in 1830, he kept this position until 1834. His name was given to a military hospital in Lyon. His memoirs were published in 1836.

His name features on the Arc de Triomphe. Initially he had been forgotten by the commission in charge of establishing a list of names worth appearing on it. Percy and Larrey had their names on it. However, his daughter, Baroness Sordeval, made sure to obtain reparation for this on November 13, 1841. His name appeared on the 29th column of the southern pillar (Bouchon L. A. & Grau D., 2008-2010). The post offices of the French Republic released in 1972 a stamp of 0.30 francs with the head of Desgenettes (Bouchon L. A. & Grau D., 2008-2010).

Alexandre Dumas described Desgenettes as “old, bawdy, very witty and very cynical”. With an independent mind, an extreme honesty and gift of a great freedom of speech, Bonaparte saw him as “too talkative”.

Souvenirs d’un médecin de l’expédition d’Égypte [Remembrances of a doctor from the expedition in Egypt], 1893