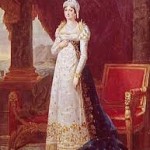 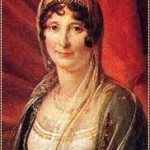 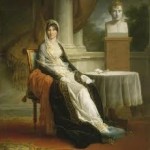 Napoleon’s mother was a woman of outstanding beauty, courage, energy and dignity. Throughout her long life she never ceased to be the centre of the extraordinary Bonaparte family. Her sense of destiny, her aristocratic pride and her passionate characther, account in large measure for that of Napoleon himslef and his consequent place in history. It is strange, therefore, considering the vast number of books written about Napoleon and his brothers and sisters, how very few have been devoted to this remarkable woman, whose personal life was so closely connected with that of history’s dominating characters druing three-quarters of a century of cataclysmic changes.

Letizia Romalino, born in Corsica during the reign of Louis XV, died in her Roman Palace the year before Queen Victoria came to the throne of England. At thirteen she married an eighteen-year old law student, Carlo-Maria Bounaparte. Together the young couple rallied to Boswell’s hero, Pasquale Paoli, then leading the Corsican struggle for independence. At eighteen Leitizia, pregnant with Napoleon, the first of her children to be born a French subject, was galloping on horseback over the Corsican battlefields. After the French conquest of Corsica, Carlo Buonaparte became one of the most important men in the island, and wehn his political duties took him to Versailles in 1782, Letizia accompanied him and there had her first and last encounter with Louis XVI and Marie Antoinette. The French Revolution brought civil war to Corsica. Widowed at 34, Leitizia and her younger children were hunted through the maquis by the anti-French party, to be rescued only just in time by Napoleon, who took them to Toulon. After poverty and exile, Letizia saw her favourite son found the Empire in which three of her other sons became Kings, on daughter a queen and the other two princesses.

Throughout her long life she displayed stoicism in tragedy, equanimity in success and a literal-minded irony which is refelected in her letters.

From: A Pride of Lions, a portrait of Napoleon’s Mother by Monica Stirling.